I learned the concept of saving by using time as my best asset when I was young; plus, I loved real estate. I loved what it did for our family who emigrated here and found it as a bigger sense of security for us.” 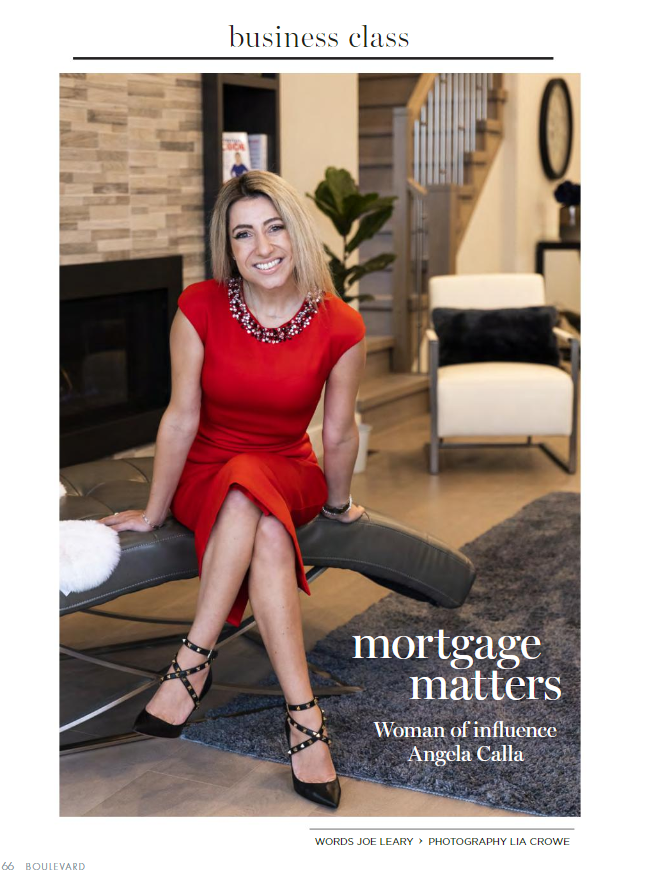 As an award-winning “woman of influence” and mortgage expert frequently ranked among the top 10 brokers in Canada, Angela Calla is clearly at the height of her game.

Growing up in North Vancouver Angela embarked on her career path as one of the founding brokers of Dominion Lending Centre in 2006.

Today, alongside her team, she continues to actively and passionately assist mortgage holders to obtain the best deals.

Where did the journey begin?

“As soon as I hit the double digits, my parents talked to me about how important it was to start saving to own a home when you’re younger, rather than older, because real estate prices were so expensive,” Angela says.

“I learned the concept of saving by using time as my best asset when I was young; plus, I loved real estate. I loved what it did for our family who emigrated here and found it as a bigger sense of security for us.”

But while she may have surmised that something within the real estate arena would ultimately forge her career; knowing the exact role wasn’t immediate.

“While I loved real estate, I wasn’t drawn to being a real estate agent,” she adds.

“When I was working for another company—fresh out of high school—I had the opportunity to chair the North Shore Business Club… and at that point I learned what a mortgage broker did.”

Angela adds: “My parents were early adapters of using a mortgage broker in the early ‘90s, and it allowed them to qualify for a bigger home and more options.

“For me that was the perfect career choice. It allowed me to marry my passion for real estate with a passion for advocating for consumers, [ultimately allowing] for multiple options to get them to their end goal. What I loved most about mortgages was that the service was free for consumers.”

And for those that have engaged in the market, the role of a mortgage broker such as Angela is vital.

“The best thing about what we do as mortgage brokers is we get people the power of choice. Most Canadians can only list about a half dozen banks, but in actuality there are dozens of banks and financial institutions out there. However, all the banks only deal with licensed professionals.

“We take away all the marketing and work on the black-and-white numbers, based on your lifestyle, your income and your profile.”

Angela goes on to point out that brokers match consumers with the best lender and the best options. She says this gives people power and actually helps educate accountants and lawyers about available options. This is important, she says, because they’re generally very influential in people’s decision-making process.

Angela is also quick to point out that without the sound advice of professionals in the field, one can often miscalculate the best plan of attack.

“Most people have made the costly mistake of thinking it’s the interest rate,” she says. “But the most important aspect is actually the terms, along with the interest that you pay, in combination with how your income is sourced—that’s a very important point.”

An industry expert on TV and radio and the go-to source for publishers across Canada, Angela is also a best-selling author of The Mortgage Code, available on Amazon in Canada and the US. Proceeds from sales are donated to a local, rotating charity each year.

She is also a magazine contributor and a guest speaker; she recently collaborated to publish her second book, Dynamic Women Success Secrets, and is working on her third collaboration called Pursuit: 365, which will be released March 2021.

It’s a lot on the proverbial plate, and it comes in addition to juggling a home life with two children.

And to prove her value as one of the best in the business class, just three months ago Angela surpassed one billion dollars in funded personal mortgage volumes—at just 37 years of age.

So we had to ask her to impart her sage advice for those getting into the market.

“Consumers often think shopping different lenders is the smart thing to do,” she says, “and it is, when it’s done through a mortgage professional. What they might not be aware of is shopping around on their own can negatively impact their credit score!  One of the major benefits of using a mortgage broker is that we submit the same single application to multiple lenders and that protects credit scores.”

Angela Calla is a 16-year award-winning woman of influence and mortgage expert. Alongside her team, Angela passionately assists mortgage holders in acquiring the best possible mortgage. She educates and empowers individuals on the “The Mortgage Show”, which she’s hosted for over a decade and is the best selling author of The Mortgage Code available on Amazon. All proceeds from her book sales are donated to the YWCA helping empower women and children in our community. Additionally, in August of 2020 she surpassed $1 Billion dollars in funded personal mortgage volume at the young age of 37.

Angela leads by example with passion and conviction. She is known as an industry expert on TV and radio and the go-to source for publishers across the Country. She has even been known to sign the national anthem at sporting events! On top of all her achievements, Angela finds the time to be a loving wife and mother of two beautiful children.