This morning’s Stats Canada release showed that the economy grew at a 5.6% annualized rate in the first quarter, after a revised 9.3% pace in the final quarter of last year. That was somewhat below economists’ expectations. Housing investment grew at an annualized 43% pace, by far the biggest impetus of the expansion. Residential investment now makes up a record proportion of GDP (see chart below). Compared with the first quarter of 2020, housing investment was up 26.5% and led the recovery. Growth in housing was attributable to an improved job market, higher compensation of employees, and low mortgage rates. After adding $63.6 billion of residential mortgage debt in the last half of 2020, households added $29.6 billion more in the first quarter of 2021.

The home-resale market’s contribution to economic activity is reflected in ‘ownership transfer costs.’ These costs are as follows:

The second chart below shows the quarterly percent change in the components of housing investment in inflation-adjusted terms. This chart illustrates the surge in existing home sales since the second quarter of last year (reflected in the red bar). Although the resale market has slowed since the third quarter of last year, it remains a driving force of economic expansion.

Growth in housing investment was broad-based. New construction rose 8.7% (quarter-over-quarter), largely driven by detached units in Ontario and Quebec. Ownership transfer costs increased 13.1%, with the rise in resale activities. Working from home and extra savings from reduced travel heightened the demand for, and scope of, home renovations, which grew 7.0% in the first quarter. 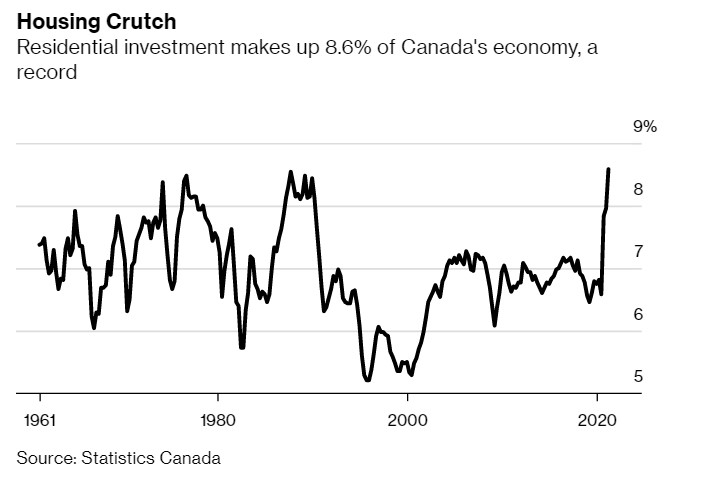 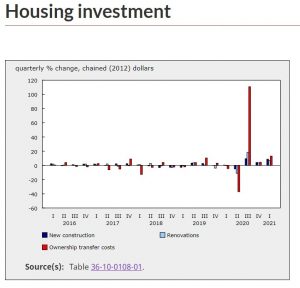 The increase in GDP in the first quarter of 2021 reflected the continued strength of the economy, influenced by favourable mortgage rates, continued government transfers to households and businesses, and an improved labour market. These factors boosted the demand for housing investment while rising input costs heightened construction costs.

The GDP implicit price index, which reflects the overall price of domestically produced goods and services, rose 2.9% in the first quarter, driven by higher prices for construction materials and energy used in Canada and exported. The sharp increase in prices boosted nominal GDP (+4.3%). Compensation of employees rose 2.1%, led by construction and information and cultural industries, and surpassed the pre-pandemic level recorded at the end of 2019.

Strength in oil and gas extraction, manufacturing of petroleum products, and construction industries led to a higher gross operating surplus for non-financial corporations (+11.5%). Higher earnings from commissions and fees bolstered the operating surplus of financial corporations (+3.9%), coinciding with the sizeable increases in the value and volume of stocks traded on the Toronto Stock Exchange (TSX).

Most aspects of final sales were solid in Q1, with consumers a bit stronger than expected (2.8% a.r.), government adding (5.8%), and net exports also contributing. In contrast, business investment was one real source of disappointment, with equipment spending surprisingly falling. But the biggest drag came from a drop in inventories, with this factor alone cutting growth 1.4 ppts in Q1, and versus expectations, it could add a touch. The good news is that this should reverse in Q2, supporting activity in the current quarter.

On the monthly figures, there were few big surprises. March’s initial flash estimate of +0.9% was nudged up in the official estimate to +1.1% as the economy began to re-open from the second wave. Tougher COVID public health rules slammed the brakes on Canada’s economy in April. Statistics Canada estimates gross domestic product shrank 0.8% in the month, representing the first contraction in a year and a weak handoff heading into the second quarter. April may well be followed by a soft May. Even so, we still expect a strong June will keep Q2 roughly flat overall and look for robust Q3 growth.

In many respects, Q1 data is ancient history. We know with the resurgence in lockdowns, growth in Q3 will at best be flat. In the hopes that vaccinations will accelerate and COVID case numbers will continue to fall across the country, Q4 will likely see a strong resurgence in growth.