Affordable Housing Is A Key Theme In Federal Budget 2022 Today’s budget announced a $10 billion package of proposals intended to reduce the cost of housing in Canada (see box below). The fundamental problem is insufficient supply to meet the demands of a rapidly growing population base. Thanks to the federal government’s policy to rapidly increase immigration […]

Affordable Housing Is A Key Theme In Federal Budget 2022

Today’s budget announced a $10 billion package of proposals intended to reduce the cost of housing in Canada (see box below). The fundamental problem is insufficient supply to meet the demands of a rapidly growing population base. Thanks to the federal government’s policy to rapidly increase immigration since 2015, new household formation has risen far faster than housing completions, both for rent and purchase. This excess demand has markedly pushed home prices to levels beyond average-income Canadians’ means.

The measures announced in today’s budget to increase housing construction, though welcome, are underwhelming. The Feds can control the construction of lower-cost housing through CMHC. Still, most home building is under the auspices of the municipal governments, where the red tape, zoning restrictions and delays abound. The federal government increased funds to help local governments address these issues, but NIMBY thinking still prevents increased housing density in many neighbourhoods.

The headline policy announcement for a two-year ban on foreign residential property purchases may sound reasonable. Still, according to Phil Soper, chief executive of Royal LePage, “It will have a negligible impact on home prices. We know from the pandemic period, when home prices escalated with virtually no foreign money, that our problem is made-in-Canada.”

According to the Financial Post, Soper added that measures like the tax-free savings account for young Canadians would be encouraged to help them achieve their dreams of homeownership in a typical real estate market. However, in a low-supply environment with pandemic-fuelled price gains, these measures would only add more demand without addressing the supply issue. Only a few first-time buyers would be able to take advantage of it.

The Home Buyers’ Bill of Rights that would end blind bidding and assures the right to a home inspection and transparent historical sales prices on title searches is also long overdue.

The First-Time Home Buyer Incentive has been extended to March 2025. This program has been a bust. Buyers do not want to share the equity in their homes with CMHC. The Feds are taking another kick at the can, “exploring options to make the program more flexible and responsive to the needs of first-time homebuyers, including single-led households.” To date, the limits on the program have made them useless in high-priced markets such as the GTA and the GVA.

There is also a laundry list of other programs to create additional affordable housing for Indigenous Peoples, Northern Communities, and vulnerable Canadians. Enhanced tax credits for renovations to allow seniors or disabled family members to move in; and for seniors to improve accessibility in their homes. As well, money is provided for long-term efforts to end homelessness.

To combat money laundering, the government said it would extend anti-money laundering and anti-terrorist financing requirements to all mortgage-lending businesses within the next year.

For greener housing initiatives, the government is planning to provide $150 million over five years starting this year to drive building code reform to focus on building low-carbon construction projects and $200 million over the same timeline for building retrofits large development projects. 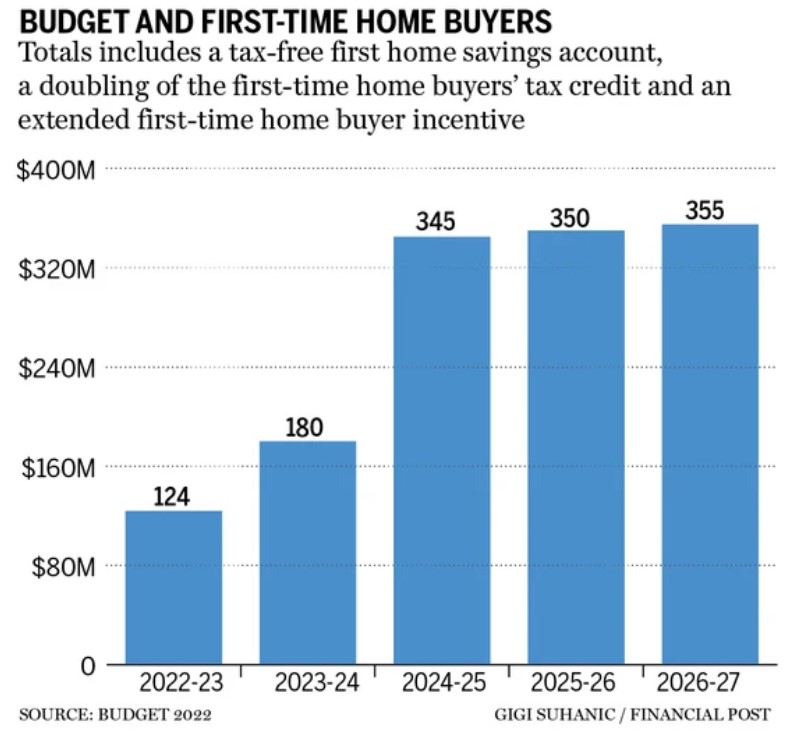 Nothing the federal government has done in today’s budget will make much of a difference in the housing market. What does make a difference is the spike in interest rates that is already in train. Fixed mortgage rates are up to around 4%, and variable mortgage rates have begun their ascent. There is still a record gap between the two, but the Bank of Canada will likely hike the policy rate by 50 bps next week. The Bank will probably hike interest rates at every meeting for the remainder of the year and continue into the first half of next year.

It is also noteworthy what Budget 2022 did not do. It did not address REITs or investment activity by domestic non-flipping purchasers. Some were expecting a rise in minimum downpayment on investor purchases or restrictions on using HELOCs for their funding.

Budget 2022 did not raise the cap of $1 million on insurable mortgages. It did not reinstate 30-year amortization, a favourite of the NDP. And, it did not follow the BC provincial government in allowing a “cooling-off” period after a bid has been accepted, technically giving would-be buyers more time to secure financing.

This article is from the Sherry Cooper Assoc.