Holy Smokes! Canadian Inflation Is At 6.7% StatsCanada today reported that consumer prices rose a whopping 6.7% year-over-year in March, a full percentage point above the 5.7% reading the month before. Market-driven interest rates shot up on the news as the prospects increase for another half-point rise in the overnight rate when the Bank of […]

Holy Smokes! Canadian Inflation Is At 6.7%

StatsCanada today reported that consumer prices rose a whopping 6.7% year-over-year in March, a full percentage point above the 5.7% reading the month before. Market-driven interest rates shot up on the news as the prospects increase for another half-point rise in the overnight rate when the Bank of Canada meets again on June 1.

There is no sugar-coating this. Bonds were walloped as the Government of Canada’s two-year yield shot up to 2.6%, the 5-year yield rose to 2.75%, and the 10-year yield spiked above 2.825% immediately following the data release. The 5-year yield–so crucial for setting the 5-year fixed mortgage rate–has nearly quadrupled over the past year. Inflationary pressure remained widespread in March, as prices rose across all eight major components. Prices increased against the backdrop of sustained price pressure in Canadian housing markets, substantial supply constraints and geopolitical conflict, which has affected energy, commodity, and agriculture markets. Further, employment continued to strengthen in March, as the unemployment rate fell to a record low. In March, average hourly wages for employees rose 3.4% y/y, raising the risk of wage-price spiralling.

Excluding gasoline, the Consumer Price Index (CPI) rose 5.5% year over year in March, the fastest pace since introducing the all-items excluding gasoline special aggregate in 1999, following a 4.7% gain in February.The CPI rose 1.4% in March, following a 1.0% gain in February on a monthly basis. This was the largest increase since January 1991, when the goods and services tax was introduced. On a seasonally adjusted monthly basis, the CPI rose 0.9% in March, matching the most significant increase on record.

Food prices continued to surge, as did the prices of durable goods such as automobiles and furniture. It cost considerably more for restaurants, hotel rooms and flights. 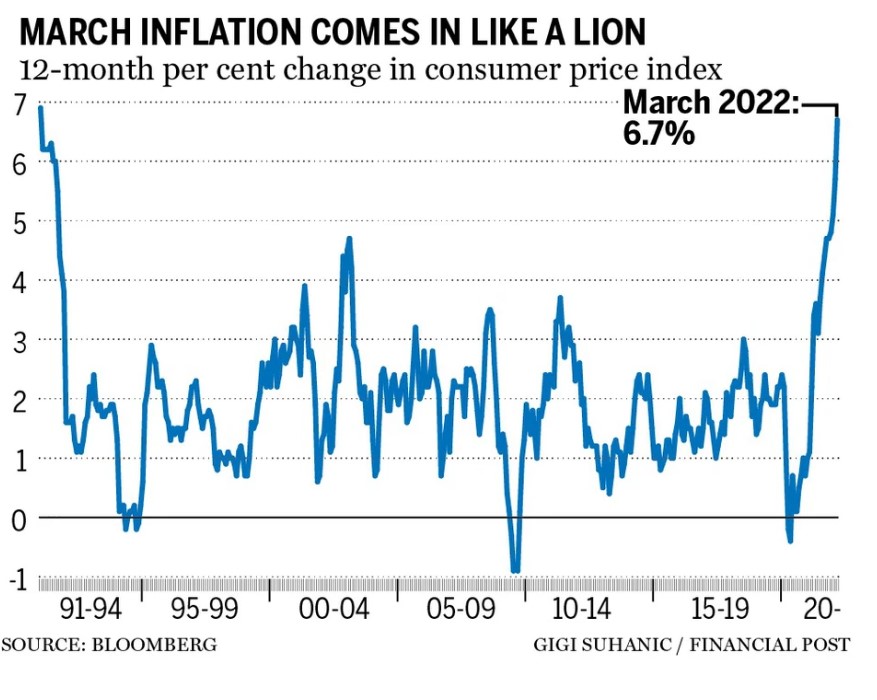 Bond markets sold off all over the world today. The yield curves flattened as shorter-term yields rose more than their longer-dated counterparts, reflective of the view that central banks will accelerate their tightening.

This could well mark the top of the surge in inflation, but the return to the 2% inflation target could be prolonged, particularly if inflation expectations become embedded. For this reason, Governor Macklem is likely to tighten aggressively once again on June 1, which will further dampen housing activity.

This article is accredited to the Sherry Cooper Assoc.