Gasoline Prices Dipped, But No Time To Celebrate While we are all grateful that gasoline prices declined from record highs in July, today’s release of the July inflation data shows that the underlying inflation momentum remains too strong for comfort. Governor Macklem will likely continue to hike the policy rate aggressively when they next announce […]

Gasoline Prices Dipped, But No Time To Celebrate

While we are all grateful that gasoline prices declined from record highs in July, today’s release of the July inflation data shows that the underlying inflation momentum remains too strong for comfort. Governor Macklem will likely continue to hike the policy rate aggressively when they next announce their decision on September 7th. Judging from the swaps market, traders are betting evenly on a 50 bps vs. 75 bps increase next month.

The Consumer Price Index (CPI) rose 7.6% in July from a year earlier, compared to 8.1% in June. The dip reflected the largest drop in gasoline prices since the pandemic’s beginning.

On a monthly basis, however, inflation increased 0.1% from the June reading, the seventh consecutive rise. Excluding gasoline, prices rose 6.6% y/y last month, following a 6.5% increase in June, as upward pressure on prices remained broadly based.

Consumers paid 9.2% less for gasoline in July compared with the previous month, the largest monthly decline since April 2020. Ongoing concerns related to a slowing global economy, as well as increased COVID-19 pandemic public health restrictions in China and slowing demand for gasoline in the United States, led to lower worldwide demand for crude oil, putting downward pressure on prices at the pump.

On a monthly basis, gasoline prices fell the most in Ontario (-12.2%), where the provincial government temporarily lowered the gasoline tax. 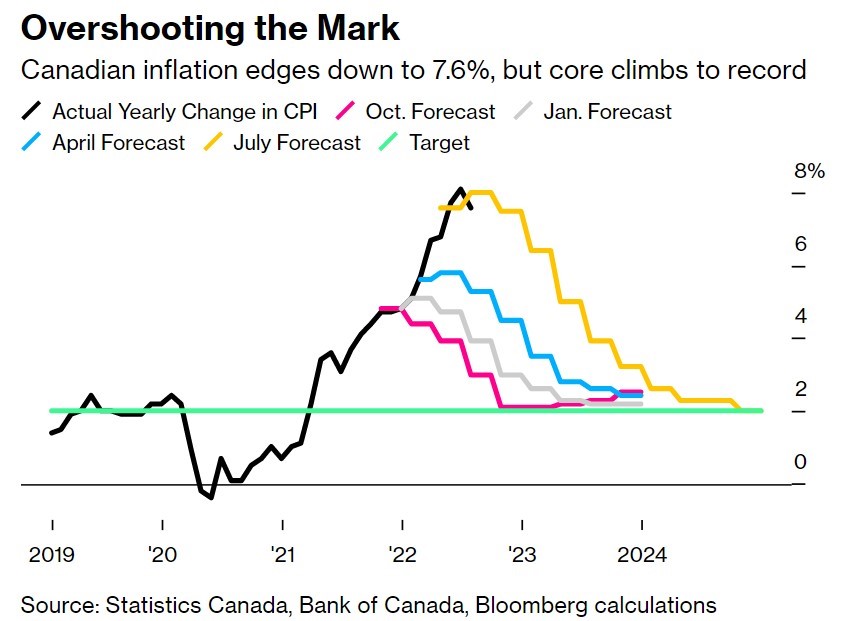 Prices for food purchased from stores increased more on a year-over-year basis in July (+9.9%) than in June (+9.4%). Prices for bakery products (+13.6%) continued to rise faster as wheat prices remained elevated. Higher input costs and global supply uncertainty related to the Russian invasion of Ukraine continued to put upward pressure on global wheat prices amid an already constrained supply.

On a year-over-year basis, the mortgage interest cost index (+1.7%) increased for the first time since September 2020 amid elevated bond yields and a higher interest rate environment.

In the context of higher mortgage rates, which could lead to additional rental demand, rent increased 4.9% in July compared with the same month in 2021, following a 4.3% increase in June. Faster price growth in the rent index was largely driven by an acceleration in Ontario (+6.4%) and Alberta (+3.4%).

With some luck, price pressures might be peaking. The chart above shows the Bank of Canada’s most recent forecast for inflation. The Bank of Canada estimated inflation would average about 8% through the third quarter of 2022 before slowing. Now, the estimate could be revised a bit lower this time. That is why roughly half of the market participants expect a 50-bps rate hike next month, revised down from the 75-bps figure widely expected a month ago. Either way, the prime rate is rising more rapidly than the five-year government of Canada bond yield, making fixed mortgage rates relatively more attractive than variable rates tied to prime. Regardless of which path the Bank takes at the next meeting, the Bank will stay the course for some time.

Central banks cannot return to easy money quickly without risking another burst of inflation. Even with the Canadian economy slowing sharply in the second half of this year, labour markets remain very tight, and the central Bank is behind the curve. With hindsight, we know they kept rates too low for too long, triggering excess demand, particularly in the red-hot housing sector. Watching that unwind, especially in the country’s most expensive and frothy housing markets, will be the Bank’s most prudent option.

(This article is courtesy of the Sherry Cooper Assoc.)