Inflation Ticked Up Again in January StatsCanada today reported that consumer price inflation rose to 5.1% from year-ago levels in January, compared to 4.8% in December. This was higher than expected but still well below US inflation posted at 7.5% for the same period. Undoubtedly, this puts additional pressure on the Bank of Canada to […]

Inflation Ticked Up Again in January

StatsCanada today reported that consumer price inflation rose to 5.1% from year-ago levels in January, compared to 4.8% in December. This was higher than expected but still well below US inflation posted at 7.5% for the same period. Undoubtedly, this puts additional pressure on the Bank of Canada to hike the overnight policy rate target in early March when it meets again, despite the disappointing jobs data last month. Even excluding gasoline, the CPI rose 4.3% y/y last month.

Shelter costs rose 6.2% year over year in January 2022, the fastest pace since February 1990. Higher prices for new homes contribute to higher costs associated with the upkeep of a property or the homeowners’ replacement cost. Higher home prices also tend to raise other owned accommodation expenses. In contrast, lower interest rates bring borrowing costs down—measured in the CPI through the mortgage interest cost index, which includes new and resale home prices.

The owned accommodation index, which measures the ongoing costs of homeownership, increased 6.1% year over year in January. Homeowners’ replacement cost (+13.5%) and other owned accommodation expenses (+14.0%), which includes commissions on the sale of real estate, put upward pressure on shelter prices amid rapid price growth in the housing market throughout the pandemic.

Renters also saw a rise in prices, as the rented accommodation index increased 3.2% year over year, contributing to the higher shelter prices Canadians faced in January.

Another highly visible component of rising inflation was the surge in food prices. Shoppers paid more for groceries, as food prices from stores rose faster in January 2022 (+6.5%) than in December 2021 (+5.7%).

Prices for fresh or frozen beef (+13.0%), fresh or frozen chicken (+9.0%), and fresh or frozen fish (+7.9%) rose more in January 2022 compared with December 2021. Margarine (+16.5%) and condiments, spices, and kinds of vinegar (+12.1%) were also up compared with January 2021. Higher input prices and shipping costs because of ongoing supply chain disruptions have contributed to increased food prices. In addition to supply chain disruptions, unfavourable growing conditions have led to higher prices for fresh fruit (+8.2%) and bakery products (+7.4%). 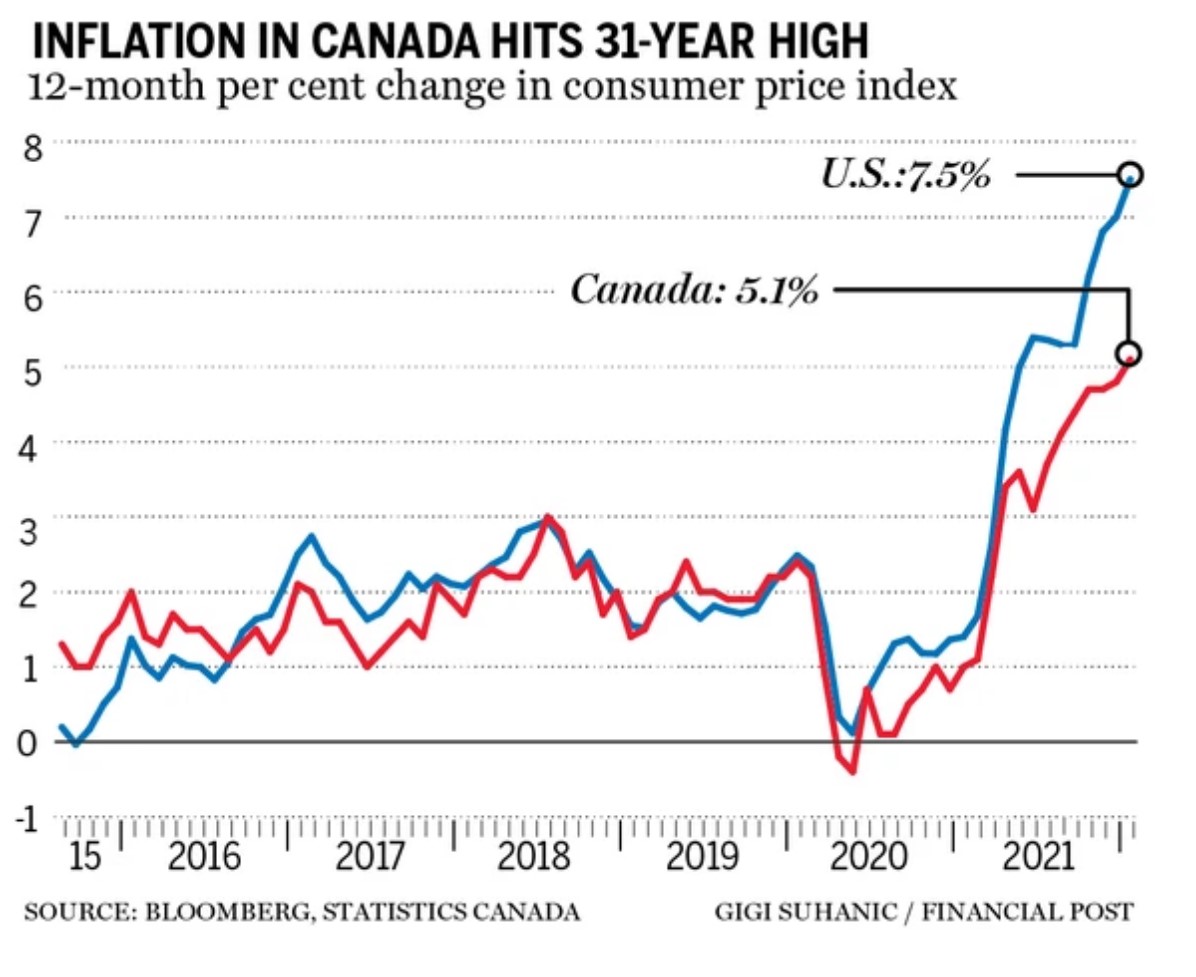 Consumers paid more for alcohol in January 2022, as alcoholic beverages purchased from stores rose 2.9%, following a 1.6% gain in December 2021. Much of this increase stemmed from higher prices for both beer and wine, amid material shortages and increased shipping costs. 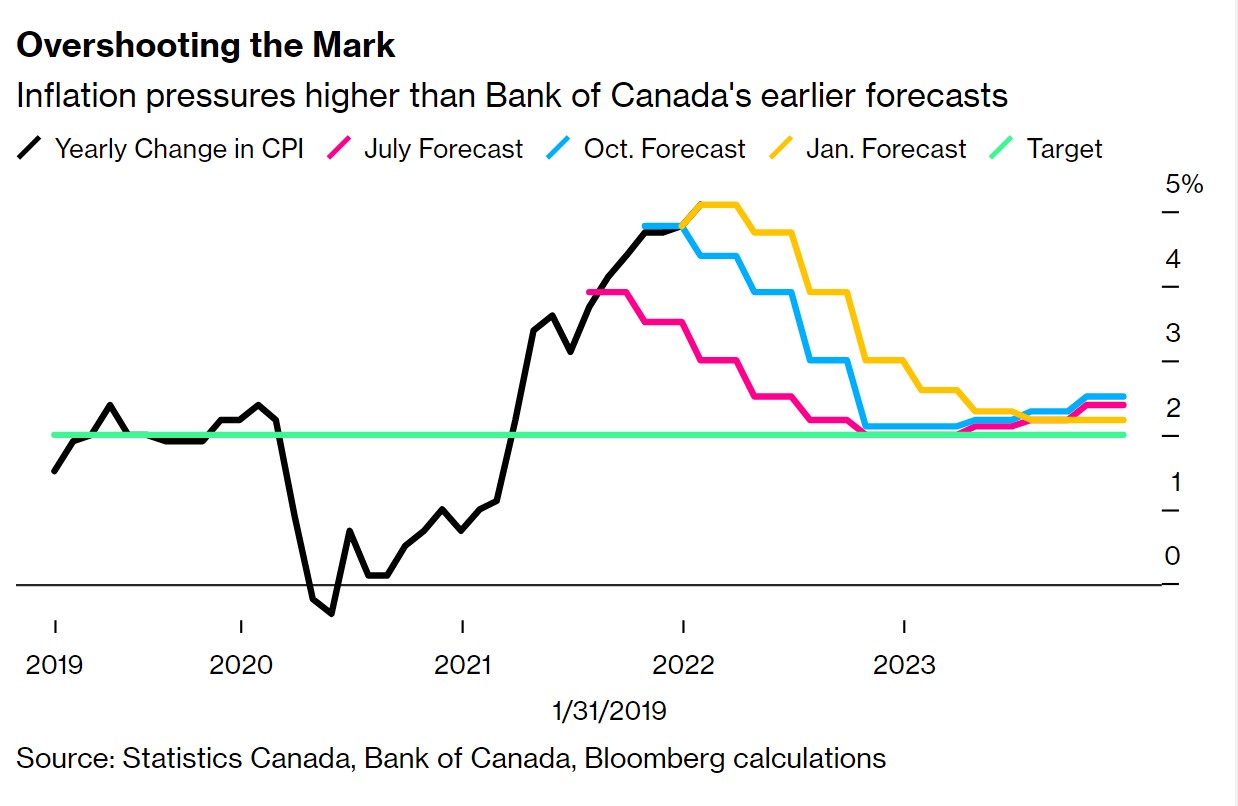 Inflation has now exceeded the Bank of Canada’s 1% to 3% target band for 10 consecutive months. Other central banks have already begun to hike overnight rates from their effective lower bound of 25 basis points introduced in March 2020.

The U.S. Federal Reserve is preparing to raise interest rates in March, and last Friday’s jobs report fueled speculation it may need to move aggressively. The Bank of England just delivered back-to-back hikes, and some of its officials wanted to act even more forcefully. The Bank of Canada is set for liftoff next month. Even the European Central Bank may get in on the action later this year.

Markets are pricing in as many as seven increases in borrowing costs over the next 12 months. While the Bank runs the risk of tightening too aggressively, there is little doubt that the emergency monetary easing has run its course.

This article is credited to the Sherry Cooper Assoc.