The Bank of Canada raised its inflation forecast in the newly released July Monetary Policy Report (MPR), making it one of the most hawkish central banks in the world. The Bank announced its third action to reduce its emergency bond-buying stimulus program by one-third. The central bank was among the first from the advanced economies to shift to […]

The Bank of Canada raised its inflation forecast in the newly released July Monetary Policy Report (MPR), making it one of the most hawkish central banks in the world. The Bank announced its third action to reduce its emergency bond-buying stimulus program by one-third. The central bank was among the first from the advanced economies to shift to a less expansionary policy last April when it accelerated the timetable for a possible interest-rate increase and pared back its bond purchases. In today’s press release, the Bank announced it would adjust its quantitative easing (QE) program again to a target pace of $2 billion per week of Government of Canada bond purchases–down $1 billion from its prior target of $3 billion per week. This puts upward pressure on bond yields, all other things constant. No doubt, the federal government’s funding of the enormous Covid-related budget deficits has been abetted by the central bank’s bond-buying.

The Bank of Canada has said it wants to stop adding to its holdings of government bonds before it turns its attention to debating rate increases. Still, officials chose not to accelerate the projected timeline for a possible hike today.

In holding the overnight rate at the effective lower bound of .25%, the Governing Council reaffirmed its “extraordinary forward guidance” that the Canadian economy still has considerable excess capacity. The recovery continues to require extraordinary monetary policy support. “We remain committed to holding the policy interest rate at the effective lower bound until economic slack is absorbed so that the 2% inflation target is sustainably achieved,” the central bank said in the policy statement. In the Bank’s July projection, this happens sometime in the second half of 2022.

Swaps trading suggests investors are fully pricing in a rate hike over the next 12 months and a total of four over the next two years, which would leave Canada with one of the highest policy rates among advanced economies. This puts the Bank of Canada ahead of the Fed in raising interest rates. Chair Powell told Congress today that the US economy isn’t ready for bond tapering. “Reaching the standard of ‘substantial further progress’ is still a ways off,” he said in prepared remarks. In the U.S., investors aren’t pricing in any rate hike over the next year and only two over the next two years.

The Bank revised its forecast for Canadian GDP growth this year from 6.5% in the April MPR to 6.0% because of the more restrictive third-wave pandemic lockdown in the second quarter. Growth is now expected to pick up strongly in the third quarter of this year. Consumer confidence has returned to pre-pandemic levels, and a high share of the eligible population is vaccinated. As the economy reopens, consumption is expected to lead the rebound, increasing spending on services such as transportation, recreation, and food and accommodation.

Housing resales have moderated from historically high levels but remain elevated (Chart below). Other areas of housing activity—such as new construction and renovation—remain strong, supported by high disposable incomes, low borrowing rates and the pandemic-related desire for more living space. 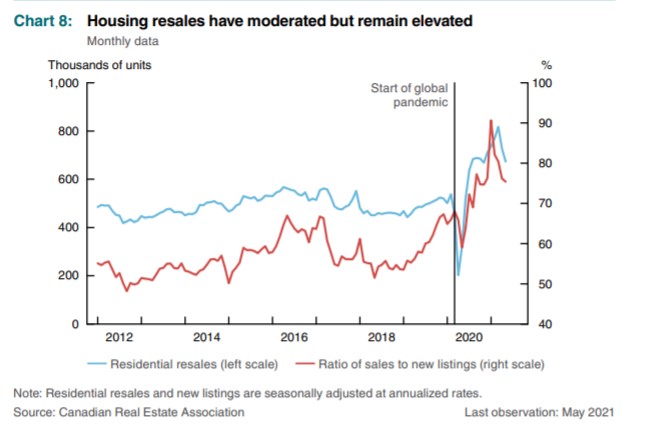 The Bank revised up its inflation forecast for this year but asserted once again that inflation would return to 2% in 2022. This is a controversial call consistent with central-bank mantras around the world. The BoC said, “Three sets of factors are leading to this temporary strength. First, gasoline prices have risen from very low levels a year ago and are above their pre-pandemic levels, lifting inflation. Second, other prices that had fallen last year with plummeting demand are now recovering with the reopening of the economy and the release of pent-up demand. Third, supply constraints, including shipping bottlenecks and the global shortage of semiconductors, are pushing up the prices of goods such as motor vehicles.

The BoC expects CPI inflation to ease by the start of 2022 as the temporary factors related to the pandemic fade. Economic slack becomes the primary factor influencing the projection for inflation dynamics thereafter. The uncertainty around the outlook for the output gap and inflation remains high. Because of this, the estimated timing for when slack is absorbed is highly imprecise. In the projection, this occurs sometime in the second half of 2022. After declining to 2% during 2022, inflation is expected to rise modestly in 2023 as the economy moves into excess demand. The excess demand and resultant increase in inflation to above target are expected to be temporary. They are a consequence of Governing Council’s commitment to keeping the policy interest rate at the effective lower bound until economic slack is absorbed so that the 2% inflation target is sustainably achieved.

Inflation is expected to return toward the target in 2024. The projection is consistent with medium- and long-term inflation expectations remaining well-anchored at the 2% target. Both businesses and consumers view price pressures as elevated in the near term. A large majority of respondents to the summer 2021 Business Outlook Survey now expect inflation to be above 2% on average over the next two years. Nonetheless, firms view higher commodity prices, supply chain bottlenecks, policy stimulus and the release of pent-up demand as largely temporary factors boosting inflation higher in the near term.

Only time will tell if the Bank of Canada is correct in believing that inflation pressures are temporary. Financial markets will remain sensitive to incoming data, but for now, bond markets seem willing to accept their view. The 5-year GoC bond yield has edged down from its recent peak of 1.0% posted on June 28th to a current level of .936%. As well, the Canadian dollar has weakened a bit, to US$0.7993, since the release this morning of the BoC policy statement. The loonie, however, remains among the strongest currencies this year vis a vis the US dollar.

Read the original article published by Dr. Sherry Cooper here on her website.